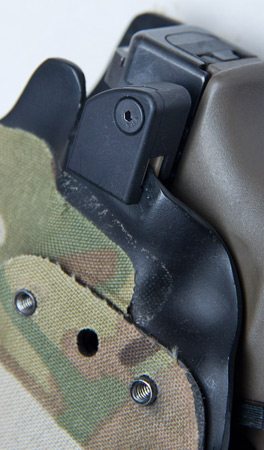 As you may know I'm a fan of the Safariland ALS series holsters and it can be hard to improve a great thing, but the Nub Mod is looking like a pretty cool option so far.

The Nub Mod concept is similar to that of say a extended magazine button on a pistol where it helps tailor the item just the little bit more to the user's needs. On that same note, it isn't like the Safarliand ALS thumb mechanism is bad, but they have to find the best middle ground of ease and security for all kinds of users. Using the Nub Mod is a conscious decision to make releasing the ALS lock easier at a minimal security loss cost.

Currently The Nub Mod comes as 2 metal parts along with a screw and hex wrench. It feels heavy duty like what folks expect out of high end gun accessories and has all you need in the box to use. Installation wise it is easy, but I did manage to get in a bit of a wing-it mode and put it on wrong during my first attempt. Taking a big 5 seconds to pay attention I then noticed the proper way was to have the screw facing the mount side of the holster. After taking on and off a couple times I also found it easier to go ahead and get the screw started a little bit putting the pieces together, slip on to the thumb release, then tighten down.

Once installed and getting in some time to use, the Nub Mod changes were overall very intuitive and noticeably made releases easier. This was most apparent when really trying to speed things up where time to time this would cause me lock things up on the default holster setup. For considerations it does change how one's hand flows a little bit so I have to be a little more careful on where my starting grip goes, however that is always a concern for me on any holster. Specifically trying to get up high on the grip and doing it quick, yet not so far up that ones is touching the back of the slide resulting in a funky grip or requiring time to slide into the correct grip.

The release ease could generally be thought of as adding some error tolerance which certainly comes in handy in stressful situations or when one has to get creative such as a support side draw. With extra width there is much less chance to do a side miss and the angle along with the extra length of the Nub Mod provides more leverage on a push for solid releases.

As for cons, the Nub Mod is just not made for those who have to prioritize security. For starters it is not made to work with the Safariland ALS Guard generally shows what kinda party it is going to be. Anything that makes a holster easier for the user to release will make it easier for a badguy to release as well. Gear interface wise I haven't come across any issues yet, but everyone should keep an eye on how their gear touches in various positions to make sure there is no obvious accidental release threat. Although I haven't had my pistol straight up fall out before, I have been in some wacky positions where I accidentally released the button on a normal ALS holster setup.

So far for my testing the DO series of ALS holsters has been working well with the Nub Mod, but there are some older version issues considerations:

I'll need to get in more range time, but so far I am digging the Nub Mod when it comes to offhand results. I was already running a low security setup so increase of release ease comes at virtually no cons to my situation. Since a specialized metal accessory in its current form, the Nub Mod may be considered a little expensive, yet if you are like me and the ALS is your favorite holster already, I recommend at least giving it a try. Already keeping this in mind, Oregon Trail Defense is looking into polymer versions for the future.

Lula M16 / AR 15 loader and unloader
Saturday, 11 August 2007
Since I was so happy with the MagLula, I had to try out the Lula. Rifle magazines are generally easier than pistol magazines to deal with, but the... Read More...

A day of MSM Tour
Thursday, 14 January 2010
My ol' buddies from the Army Game project Tear and Pye came to the shop with me so I could show them what all we are up to. Had a great time hanging... Read More...

Lone Star Medics - Medicine X
Friday, 15 October 2010
I've taken a grab bag of Tac classes and pretty much all of them were primarily about putting holes in bad guys, so I got to thinking diversifying a... Read More...

COUNTY COMM Compact Battery Holders
Sunday, 23 September 2007
Got some of these recently and although simple, I find them pretty handy and well designed. At first I blew off the thought of battery holders for a... Read More...