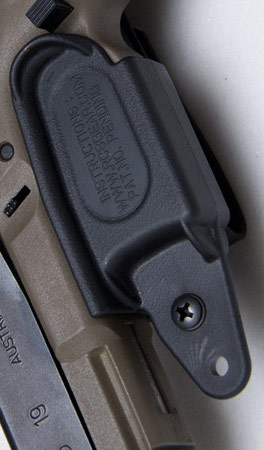 Since I've been on somewhat of a concealment holster spree I wanted to make sure and show off the Raven Concealment VanGuard 2 Holster as it offers a very unique setup. Perhaps a bit of old news as they have been around since last shotshow, but better late than never. Based on the original VanGuard design, the VanGuard 2 isn't what most expect out of a holster and is closer to an enhanced trigger guard in design.  The core differences being that the original was kydex while latest is injection molded and sports a new belt strap option. Both versions support lanyard attachments with the intent of causing the VanGuard to pop off while drawing the pistol out.

Extra design thought was included to this end as the shape allows the user to knock off the vanguard with only one hand still gripping the pistol in the event that the lanyard fails. Due to the design being specifically shaped to the trigger guard area, currently I've only seen VanGuards available for Glocks (Fits all Gen3 and later 9mm, .40cal, .357 Sig, and .45GAP Glocks. Will NOT fit and function correctly on Gen 1, 2 pistols.)

The VanGuard end result is first off a great way to make stashing pistols in interesting places safer by covering the trigger. With the new belt strap it makes a great appendix carry setup; pretty much a highly improved "Mex-carry" as now there is some retention so the pistol just doesn't fall down your pants and the trigger is protected so you don't accidentally blow your nuts off either. The somewhat high pistol ride offers great grip access so one can get a quick and effective combat grip from the start. As usual it should be noted that appendix carry isn't for everyone as while sitting you are commonly going to have the weapon pointing at some sort of flesh, thus great care must be given to a proper appendix carry draw flagging as little of yourself (and friendlies) as possible. Although the VanGuard 2 shines in the appendix position, don't let that stop you from trying it out it other belt locations. The user manual considers pretty much everywhere except the very center of the back fair game placement. On that note it is worth mentioning since so minimal, the Vanguard is not meant to be an easy reholster duty kind of setup. They instruct users to remove the Vanguard totally off the belt to then re-attach to the pistol, then clip the result to one's belt. Now I understand legally where they are coming from as a no look shitty attempt to reholster can result in the belt clip engaging the trigger, thus resulting in a bad day, however I say with time not on your side, big boy rules apply. Making sure to carefully reholster while looking at the holster and not flagging one's self is possible. Is it the safest way?, hell no, but appendix isn't the safest carry position either. If in a real tactical situation where the pistol absolutely NEEDS to be reholstered, undoing the belt rig is quite a time intensive process and I wouldn't see it much safer to end up tucking the gun in one's pants. I still like to train how I am going to fight so would rather be good at re-holstering while still wearing than only being used to the equivalent of time-out mode taking the VanGuard off the belt first. Each user will need to ponder their desired safety level as removing it off the belt is certainly safer (slow but sure), while if careless for just one moment while doing repetitions leaving it on the belt could result in some bullets into some very important body parts.

The belt clip sports a heavy duty snap that is directional dependent for releasing. My observations skills were apparently low at the time so after taking a screwdriver to pry it open I noticed eventually the cover is labeled "PULL THE DOT". The dot being a little dent and location reminder of which side it will release from. Additionally the belt clip is added in a modular fashion which is great so it can be simply unscrewed off if the user wanted to make it like the classic VanGuard 1. Perhaps more importantly, this feature makes it ambidextrous so the belt clip can be setup for left or right handed carry. Although I dig the default ride when clipped to normal pant belt position, some folks could get further crafty with a second internal belt to create a lower ride as a deeper conceal option. As a small functionality note, the belt strap will fit lose on most belts so pant belt loops are important considerations to limiting holster position drift. Back on the subject of lanyard mode, placement in deep pockets can be an issue as the distance from storage to lanyard connection point can end up long resulting in the VanGuard not releasing during the initial draw process and requiring extra effort to remove. This can be really awkward requiring a pistol to the air raise or cord tug to get a release before a solid two hand grip can even be established. When a short distance such as connected to a belt or being lucky enough to be able to lash to the bottom of a pocket, it all works out nice.

Overall the main selling point of the VanGuard 2 is an interesting mix of minimalism and unique solutions. Holster wise it isn't the most comfy or retention capable and has some anti-reholstering considerations, however it takes up extremely minimal space while being effective. The VanGuard 2 also solves the "gun tossed in a bag" safety issue where if one can't necessarily have a fancy holster in there, they can still make sure other objects don't engage the trigger. Definitely worth checking out for those looking into concealed carry options.
http://www.ravenconcealment.com/holsters/vanguard-holster-systems

Camelbak - Thermobak AB
Thursday, 22 October 2009
If you need a low profile hydration unit that can be mounted on or off armor, then the Thermobak AB is definately worth checking out. The design... Read More...

Maxpedition Excelsa Framelock Folding Knives
Tuesday, 15 April 2014
Maxpedition has been going for more of a classy look meets hard user design lately and the Excelsa knives are a good example of that. Made of great... Read More...

Shotshow 2010
Saturday, 06 February 2010
Finally had a chance to process all the friggn media. As always Vegas does not disapoint. Having to run around to get videos setup can be a bit of a... Read More...
Viking Tactics Pistol 1.5 Class
Tuesday, 30 September 2008
Viking Tactics Pistol 1.5 Class Back at shotshow 2008 I was fortunate enough to meet up with Kyle Lamb and was quickly able to determine he was a... Read More...