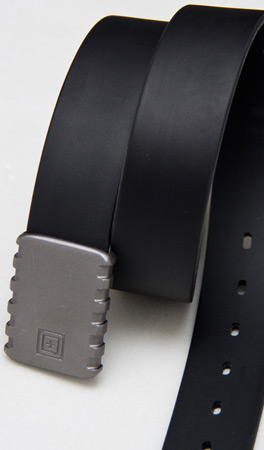 Although not super new, I'm a fan of these type belts so good to see 511's take on them. The style made popular by the Liger belt, these Apex belts have a nice upgrade of having 2 hooks to prevent buckle rotation.

Every company seems to describe the main material differently, but the Apex belts are labeled as made of 1.5" wide TPU coated B10 webbing. The end result is a very durable, non-slip, rubber like feel. This makes quite stain resistant and easy to clean. Since for tactical stuff the rigidity is a nice balance of being enough to sport a pistol and mags while still having to flex to move with one's body. As a very important detail the overall shape of the belt itself is curved to form better to one's body in the first place.

Onto the buckle, this is what separates the T-Rail and Gunner's versions. Both are cast aluminum using dual hooks, the further out hook being slightly shorter to make connecting and releasing the buckle easier. The T-rail version has a pretty cool aggressive / slightly futuristic look sporting the "rails" and inset 511 logo. On the back it appears connected with screws, normally not really worth noting, but the Gunner's version connects with rivets, which also show up on the exterior. The Gunner's version looks more low key, on that thought I'm not so sure about the white 511 logo, but likely it could be taken off one way or another.

When putting on, the extra slack goes under the buckle and rest of the belt which some people don't dig compared to classic belts. Since it is so non-slip it can take a little more effort to get the slack stashed away in a loop before connecting the buckle. Personally I've never thought it was that hard, and I think generally keeps the belt nicely in place. A snug fit is certainly recommended as a loose fit will leave the buckle prone to unhooking. I'm sporting a size small which works out great for adjustment options, properly labeled to work with 28"-30" waist.

Overall the width, material, and end result look work out great to offer a belt that can hold a pistol loadout and more all while looking fairly stylish. With different buckles and colors offered one can even choose how sassy or low key they want to be. Not to be forgotten, these belts last pretty much forever and need no maintenance which helps balance out the cost compared to a typical cheapo leather belt.

SKD-TAC PIG Hydration Carrier
Friday, 16 September 2011
SKD TAC continues to bang out goodies on their PIG line with one of their latest being an assault sized hydration pouch. The approach is very... Read More...

SUREFIRE E1B Backup and G2L with alluminum Bezel
Sunday, 15 June 2008
I first saw this lil' guy at Shotshow 2008 and ever since I've been wanting one. The original intent was for everyday carry for undercover police... Read More...

Revision Sawfly Glasses
Saturday, 16 June 2007
The Sawfly Glasses aren't exactly new, but that doesn't make them any less great. They meet and exceed all the Military ballistic requirements and... Read More...

5.11-TACTICAL Sabre Jacket
Saturday, 05 July 2008
The Sabre Jacket is 5.11's take on a full featured highly weather resistant jacket. The creation is likely a response to the growing demand of... Read More...

Viking Tactics : Stay In The Fight - Pistol Book
Tuesday, 22 November 2011
Stay In the Fight!! : Warrior's Guide To The Combat PistolFolks out there may be familiar with Kyle's Green Eyes and Black Rifles book which was a... Read More...

So You Want To Make Some Custom Morale Patches?
Tuesday, 23 May 2017
At this time we don't consider ourselves dedicated to custom work and since people still inquire, we feel after it is best to be upfront about our... Read More...

Griffon Industries Kydex Holsters and Carriers
Tuesday, 27 May 2014
Back in the day I first learned of Griffon Industries for their photo and calendar projects, turns out they are like me and dabble in making gear as... Read More...

Gerber S.A.H. Knife
Wednesday, 11 April 2012
This here stabby tool is another example of looking fairly plain yet has clever design features that make it stand out in other ways. SAH stands for... Read More...