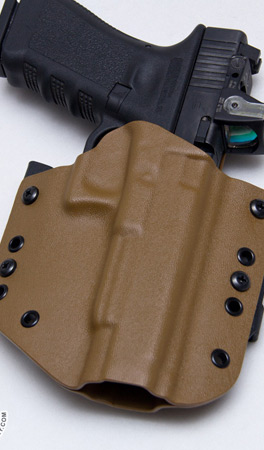 Back in the day I first learned of Griffon Industries for their photo and calendar projects, turns out they are like me and dabble in making gear as well. They happen to make some pretty fancy kydex based kit and I got to try out a few sample pieces.

Since I've got a couple of glock types they went ahead and sent me a long version of their OWB (Outside Waist Belt) holster and a double pistol mag carrier. Due to kydex beeing used in tactical applications for a decent amount of time now, what sets kydex kit apart is usually the small details.

For first impressions .08" thick kydex is used so it gives the gear a solid feel and grip of items. When inserting a pistol or magazine they produce a good positive click noise to confirm full insert placement. The end result grip is also strong which I certainly prefer so I don't have to worry about gear flying out when running around. Grip always takes a special touch since one wants it strong enough so items don't fall out even while upside down, but also not so tight that when you go for your pistol or magazine you just end up pulling on on belt like a jackwagon lever. Fortunately the holster grip is how I like it so I don't miss the lack of tension control, the double magazine carrier however does have a central tension control. On that note they come a bit tight where the lowest tension setting is about where I want it, preferably they should be semi loose and then one would use the tension control to tighten as needed. Also one magazine zone is a little tighter than the other, a common issue with double magazine kydex carriers, but fortunately not a vast difference on this one.

When it comes to unique features the belt loops certainly stand out as they offer functionality for belt sizes 1.5" to 2" without needing extra loop sets. Using a stair-step like slot design, whatever belt size used will fall nicely into place. Offhand more bulk was my only concern on this type of setup vs a classic setup and while wearing I didn't notice an issue at all. As a small observation while wearing I did find out that one will want to have their belt on generally tight. If worn loose on a 1.5" belt like I normally wear, the gear can get some unwanted rotation by popping into the other loop slots.

However for actual desired rotation (or cant) the hardware and connection points used for the attachment loops allow them to be adjusted up and down a little providing enough angle options for most folks. Even though they are not included, it is nice that there are IWB (Inside Waist Belt) attachment points offered and even MOLLE/PALS loops allowing versatility without having to buy a totally new holster or carrier.

Cut wise the holster is on the bigger end where I think it is the same base for the tac-light version. In that case the light usually is as long as a target length pistol like a G34 anyway so it all works out. If you'd rather have one scaled down for compact specific use I'm sure Griffon can accommodate you there as well. Otherwise by default you get a full sweat guard, room for suppressor sights, and just enough coverage on the trigger. Although not the version I have, I confirmed the light version has space for if you are sporting a pressure switch like the DG switch on a surefire. By getting into a lot of Kydex lately I've found out this detail is rarely on the order form for holsters so good to inquire before hand. Maybe I'm just a weirdo being one of the few using a pressure switch. Not to be forgotten on the mag carrier, I like the overall low cut as it makes even the smaller G19 mags easy to get a good grip on while still offering good retention.

Not to be forgotten, plenty of cool guy colors are offered such as red/black and carbon fiber look for if you want to class it up and show off a little or other colors like coyote and multicam when more concerned with blending in with your environment. It would be fair to say the Griffon Industries gear runs on the pricier side, but the quality level and unique features are definitely there to set them a part from others making giving them a look worthwhile.

Cadex 870 Tactical Shotgun Butt
Thursday, 01 November 2012
Or Canadian buddies over at Cadex have been making cool specialized weapon accessories for a while and this 870 Butt-end is a great example. Made to... Read More...

SHOTSHOW 2013
Saturday, 15 December 2012
It always seems harder to catch up after shotshow each year, but we have a good pile of videos as usual:http://www.youtube.com/milspecmonkey/Our... Read More...

So You Want To Make Some Custom Morale Patches?
Tuesday, 23 May 2017
At this time we don't consider ourselves dedicated to custom work and since people still inquire, we feel after it is best to be upfront about our... Read More...

Screwpop 4-in-1 Keychain Tool (Black)
Saturday, 04 December 2010
Here is a lil something for the EDC crowd. There are a lot of cool guy bottle openers out there, but Screwpop found a good way to integrate further... Read More...

Hazard4 Kato Mini-Messenger
Saturday, 09 March 2013
As usual I'm catching up on reviews so the Hazard4 Kato isn't new to the market, but as a result I've given it a solid 1 year beating and the design... Read More...

Dave's Surplus + Tactical: Tactical Blow Out Pouch
Monday, 30 March 2009
<https://dstactical.com> There are a decent amount of cool guy medical pouches these days so what sets this one apart is the compact design.... Read More...