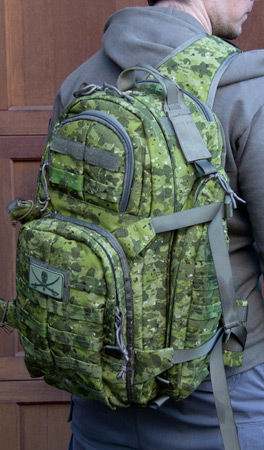 P1G-TAC is an Ukraine based company and it is always great to see how other tactical communities do things.  This particular Grab Bag has some interesting features not usually seen on this bag type, however the specifics may divide many on if they love it or could do without.

Concept wise the Saw Grab Bag was made to hold a crapload of ammo and be one hand accessible. For some specific intent the bag was made to hold 5 belts of 100 rounds for PK/PKM 7.62x54 or if not using internal pouches one can ram up to 800 rounds 7.62x54 packed in a belt. So the glaring special case from the start is that the intent is to hold some fairly heavy stuff, yet still be a sling bag. Usually one doesn't want to rock a heavy single strap bag as the lack of strap distribution tends to cause discomfort so a padded belt is included. This is a big strategy change from most sling bags as many feel it just isn't a sling bag anymore once you add a waist belt. I can see where they are coming from, but in the end releasing a belt to access a sling pack while worn is still easier than trying to access a traditional 2 strap backpack while still worn.

A cross strap option is included as well so at first one can kinda feel like there is just too much shit going on, but I'm down with the concept of having lots of wearing options that can be taken off or tucked away rather than trying to half ass add something on later to fix a need. It isn't as quick to access anymore, but having on the Saw Grab Bag with waist belt belt and cross strap helps the stability and comfort a lot. When first trying on I did wish the padded belt was removable since when it is fully tucked into the middle slot it creates a bit of a bump. To get around that one can just let the belt straps hang out wide and I found a compromise of a half tuck was not a bad option either.

Starting with the exterior, there is a good dose of PALS webbing using fabric style so it matches the camo of the rest of the pack. One might be curious about the pattern shown which happens to be called JABA POLYOVA (Field Toad) and was developed by P1G-TAC. It has a pretty good range for brighter green areas including forest and tropical zones. I'll try not to ramble on too much about it since I'll show off more later, but it works pretty nice in my current healthy foresty Oregon area. Back to the PALS webbing there is a 4+ column x 4 row setup on the lower front. I say + since there are some extra slots, but they are off-spec short. Upper front has 4x2 and then 3x5 on the sides. There is even 3+ x 2 on the padded belt sides, they aren't fabric color matched like the other zones, but good ol' webbing will do. On that note, The color used for webbing, binding, hardware, and hook-and-loop is overall a bit grey in comparison so not exactly a perfect match with the overall green Field Toad Camo. Maybe their OD was too dark, but tan499 might have worked out a little better. I'm aware how getting custom colors for every detail is no fun so I'll guess P1G-TAC considered their options. It isn't PALS spec, but there is some bonus webbing on the main shoulder strap for routing or adding small pouches. There is even some webbing down the back middle, the intent is a bit unclear with my best guess at offering options to mount the pack directly to a vest.

For other core external features there is some loop on the frontal upper pocket for name tapes (approx 5"x1") and a little more on the lower pocket, approx 3"x2" for general patch action. There is a good dose of padding on the shoulder strap, the back pads including lumbar zone, and the belt sides. The padding is a bit stiff on the shoulder strap compared to most, but something is always better than nothing. The main back pads have an airmesh construction that may be a bit more fragile compared to the other materials, while although mesh is also used on the shoulder strap it appears to be a more heavy nuty nylon mesh, yet with less cushion action. Up top is the usual webbing carry handle that turns into hook and loop port holes. I found it odd the port zones don't actually have holes so one has to stab them out. I thought maybe a production mistake, but the manufacturer seems to do this on purpose. Not a huge deal, just there isn't much reason to not already have holes cut. An X stitch zone is all ready and laid out, but not everyone is going to be jazzed about cutting out through webbing, cordura, and loop without stabbing something else on accident. The pack has 4 compression straps integrated, 2 high, 2 low. Most will find them useful for compression or limiting how much the main compartment opens, but for now I'm not using them so tied them down with shock cord to keep them overall out of the way. The shoulder strap connection is a little unique where instead of the main connection being at the end, 2 female buckles split off in a Y for a more ambidextrous setup. This way one side will be the main connection and the other can be the cross strap. As a quick note there appear to be no grommets for draining.

Getting to the internals, the lower front pocket opens up with dual zippers and has some substantial organizational options. The back interior has a single zippered mesh pocket, single zipper standard pocket, sleeve pocket with keyper, and 2 pockets with hook and loop straps. Snuck inside the billowed pockets are 3 pen slots on one and a simple sleeve on the other. On the frontal interior side are simlar sized pockets with hook and loop straps and a single zippered mesh pocket. Between all of theses pockets one certainly has a lot of organizational options with the sizing being pretty good for small item tactical gear variety. Moving along on compartment zones, the frontal upper one is less involved since smaller. It opens with a single zipper and has a simple sleeve on the back along with a single zipper mesh pocket on the frontal interior. The side compartments open up with single zippers and have 2 sleeve pockets. They seem like a bit of a weird size at first, but it makes more sense than one long sleeve. The side compartments offer obvious places for water bottles, but will fit a good variety of items in general.

Up top is a smaller single zipper compartment. Lined with soft material it is solid place to stash eyewear or small electronics. Over in the back a good sized dual zipper opening compartment. the frontal interior has stiffener for support and there is a port hole to the main compatment on the upper back side to make it an obvious pocket option for hydration bladders. There is a hang strap, but it is a little odd being fairly long and uses a tiny bit of hook and loop closure at the end. The big show main compartment opens up with dual zippers and inside is a webbing fest. Both sides have 2" webbing with 1" webbing sewn on top, but the frontal interior side is setup for horizontal mounting and the back interior is setup for vertical mounting. The front seems close enough to PALS spec, however it is a bit odd the back side is off-spec where there is more vertical spacing. I asked P1G-TAC about it and it seemed this was due to fitting their intented SAW pouches better, but I tried to give them a fair warning most people are going to think it is pretty weird to be just a little off spec. One can still attach PALS pouches, just there will be more fudging involved and usually less weaving. I don't plan to use the 2" webbing slots anytime soon, but I could see where they may help in spacing options if lashing items directly to the webbing and perhaps make the panels a little more rigid at the same time. For a lesser seen feature there are 2 webbing straps on the upper frontal interior side to make for tear open pulls as seen on some CCW bags. Since there are 2 it allows for ambi options and the can attach to the outside using hook on the webbing and loop zones near the hydration ports.

When it comes to actually wearing and using the SAW Grab Bag, the PALS interior works out overall pretty good since the horizontal mount tends to be better for accessing while slinging around to one's front and the vertical mounting works out more for using like a standard tactical backpack. From the small Monkey sized person perspective I am cutting it close on the padded belt, but generally happy I was able to cinch everything down snug. Based on the example pictures and sling bag concept I'll guess most will wear while overall slick. If wearing a battle vest the main strap will probably cover other gear and generally be a snag fest trying to rotate to one's front. When using as just a casual go bag, all the extra straps will seem like a hassle, but if one actually needs to do some serious boots on the ground action, the padded belt helps a lot with weight comfort and everything can be strapped down to allow heavy movement. As it comes closer to business time or the threat level is higher, one can then adjust the pack to be more quickly accessible. Even though the pack isn't huge, it can still hold a lot of ammo, general gear, or even some short barrel rifle setups. Small quirks aside I think the SAW Grab Bag meets it's design goals pretty well and offers some bag variety to those who may find other creative uses. At first I thought it was just heavy, over-complicated, and weird, but it grew on me after giving it a shot and thinking about what it can actually do.

MAXPEDITION - Modular Inserts
Sunday, 25 October 2009
Maxpedition and other tactical gear makers have been making bags with loop velcro panels for a while so finally we have some more options on how to... Read More...

TACTICAL TAILOR MICH Helmet Cover
Wednesday, 25 July 2007
It Isn't protective, but thought this was the best category placement for now: A solid and affordable cover here. Made of 50/50 NYCO makes the... Read More...

511 / Blade-tech:Training Pistol Barrel - Sig 226
Sunday, 11 May 2008
This is a straight forward item that assists in training safety and identification. To install ones just breaks their gun down and replaces their... Read More...

SHOTSHOW 2007
Sunday, 21 January 2007
SHOTSHOW 2007 Took me a little bit, but here is a nice media dump of my recent shotshow adventure. Was great to meet a lot of digital personalities... Read More...

ShotShow 2012
Sunday, 11 March 2012
Even slower than usual, but making sure to get the media on up. Shotshow went overall smooth this year, no crazy rainstorms and better wireless... Read More...